Reflections on the Jungle

A few weeks ago, my brother and a friend (Ulara) came to visit me in Cambodia. The morning after they arrived, we took a bus to a small town at the base of the Cardamom Mountains near the Cambodian coast. There is very little development in the region, which makes it a prime location for ecotourism. I chose Chi Phat (the town) because I saw it in a brochure when I visited a different town in the area, and the project seemed interesting.

The organization operating the tours was set up by a Dutch NGO, and was designed to help the poor village shift away from environmentally destructive ways of life like poaching and logging to providing services to tourists interested in the relatively untouched jungle that surrounds it. It’s a very interesting program, and it only just started, so it will be very interesting to see how it turns out.

After we got off the bus in the sleepy river town called Andoung Teuk, we looked for possible transportation to Chi Phat, which is about 15-20km up the river. The town used to have decent business activity until the Thai government funded and built a new bridge, removing the need for travelers to stop and cross the river in a ferry. After briefly wondering how we would make it up the river, a middle-aged man pulled up and asked if we wanted a moto (motorcycle taxi) up to the town. The cost would be five dollars. He called a couple more of his buddies, and each of us hopped on with our drivers.

The drive itself was an amazing experience. My driver was probably the best and most fearless moto-driver I’ve ever ridden with. We swiftly made our way over some pretty hairy dirt roads with potholes and mud, passing by verdant fields of sugarcane against a backdrop of pure, deep blue post-rain sky. Then he surprised me by leaving the other two motos and driving on to a tiny path into what seemed like the woods. The road was sandy and filled with puddles. I kept thinking we would slip and fall out, but each time he just stepped on the gas aggressively and took control back from the elements. We flew through terrain I wouldn’t dare try on my own, fording rivers and riding on loose sand, all without getting the least bit dirty. This guy was amazing.

We then merged with the main road again, and the others were nowhere in sight, although there were a couple of soldiers with AK-47s on a moto in front of us. We got to an area so muddy it was physically impossible to ride, so I got off and waited for the others. I waited almost 10 minutes for the others to catch up, which gives you an idea of how crazy my driver was. We walked through the mud along with some young Cambodian guys, a couple of whom were singing an old-time Cambodian song. Eventually we got to the river, saying goodbye to the moto drivers, one of whom kept proudly telling us that he’s ethnically Chinese, and one of whom kept shouting “Cambodia is happy, Cambodia is happy!” and then laughing heartily. We hopped on a small ferry powered by what seemed like a souped-up lawnmower engine. We were very much on a jungle river. Deep green palms and nameless jungle plants lined the river up to the water’s edge.

The town was small and very “underdeveloped.” It reminded me a lot of the villages I visit when I do client interviews, but maybe even a little poorer because it lacked a direct land route, and the nearest decent-sized city is a couple hours away. We arrived at the main office for the ecotourism organization, which was a small wooden house very similar to the houses that surrounded it. They helped us choose a tour, called over some guides to accompany us, and sent us on our way with our bikes and gear. We chose to bike because it was already late in the day, and we thought we might not make it to the campsite before dark if we walked. My pack was very heavy (I had about 18 water bottles in it) and was extremely uncomfortable when I rode because it put so much pressure on my “seat” when I sat on the bike. I knew I wasn’t in this trip for comfort though, so I stopped thinking about it, especially when I found out that our guide’s pack was probably 1.5 to 2 times heavier than mine. How he rode up that mountain with that pack wearing flip-flops…

Two minutes after we started riding, the sky opened up and it started pouring. We put on our ponchos, but they weren’t much use. Five minutes after starting, Ulara fell into a huge muddy puddle. That pretty much set the tone for the rest of the ride. We climbed through what initially “didn’t feel like the jungle,” mostly farms and low, sloping hills. It alternated between rainy and stiflingly hot (especially with the ponchos on), and we took breaks often. It felt good to be back on a bike, but I realized how much strength I lost while in Cambodia.

Eventually, we entered the “real jungle.” Riding through the jungle wasn’t a very visual experience. There wasn’t much to see, just green-everything and one narrow, muddy track that comprised the trail. The sounds were incredible though. Bugs made sounds that reminded me of science fiction movies, birds sang with voices that made pure, piercing tones, and rain that sounded like eternity. We also used our sense of touch – we needed to constantly check for leeches, which seemed to find the smallest unprotected patch of skin to bite into. A little itchy and painful, but not as bad as I imagined. I do remember one visual experience vividly, though – passing through a “cloud” of 10 or 12 brilliant yellow butterflies bouncing sharply through the air. It sort of felt like a computer generated color show.

After a few hours of riding (I’m not sure, maybe only 3), we arrived exhausted, wet, and smelly at the campsite, which was at the edge of a natural clearing in the jungle. My first impression was “National Geographic African Savanna” (even though I’m not sure what a savanna is). It felt so unreal to look at something so untouched by human development, and to know that there would be no other people passing through the area while we were there. We saved exploration for the morning though, because we needed to set up the tent.

The night was pleasant with frequent showers, and we had a filling meal of rice and vegetable-egg stir fry. I ate so much, but still felt like I could eat more. Or so my legs told me. We slept in hammocks with mosquito-nets built in. We agreed it was the most comfortably we slept the entire time Aaron and Ulara visited. We slept so early I got up at 3:30 and wandered around, assisted by the full moon. At around 5 or 5:30, we walked out to the “pond” in one edge of the large (1km square?) clearing. The feeling was incredible. The purity of the light, the clarity of the air, and the absolute silence -- save the beautiful calls of exotic birds -- put me in a state of wonder. As the sky lightened and the full moon set, I told my brother that I’ve probably only seen one other place in the world as beautiful as this: Crater Lake at sunrise. With my poor writing abilities, describing it would only cheapen the mental image I want to create in your mind, so I’ll just leave it at a couple of adjectives: silent, verdant, blue, white, wet, pure.

After spending an hour in almost meditative contemplation listening to sounds, watching wild birds, looking at insects and spiders, and observing plants, we headed back, barely speaking except to remark on the beauty and awe of the place.

After breakfast, we got on our bikes again. We were still tired from the previous day, but our loads were lighter because we had eaten so much rice and drank so much water. Fortunately, even though the road was narrower and steeper than the previous day, it was generally downhill. We had to get off and walk several times because the path was dangerously steep and muddy (Aaron "endo-d" once). I started getting the hang of things after a while, though. After an hour or so, we suddenly emerged into a brilliant grassy clearing. It was a bit of a relief after struggling to make progress through the jungle.

We eventually came to a village, where we snacked, climbed trees to get local fruits, and talked to a crazy lady. She was definitely a bit crazy. Our guide said she was drunk, but I think it was more than that. Whenever she talked, she would suddenly switch into a high-pitched, slightly annoyed-sounding yelp mid sentence. I couldn’t tell if she was mad or just getting excited.
We went to a pleasant, rocky waterfall, where Ulara took a nap and Aaron and I swam in the comfortably cool water. Crazy lady followed us for a bit, but then walked back to her house via the river. We ate lunch and then headed back to the village.

We stopped at another waterfall, but at this point everyone was exhausted and just wanted to get back and take a shower. We found our guesthouse, and were invited to a dance party where Aaron and Ulara got to experience some genuine Khmer dancing – the type with the hand-movements and the dance steps and walking around the centerpiece slowly in a circle. The local manager of the ecotourism group was drunk and made sure we had a good time.

In the morning, we took bucket showers and had breakfast made by a very nice, skinny old lady. She made very good food, and seemed to enjoy hanging out with us, even if we couldn’t communicate so well. We then said bye to our friends, and promised we’d write (since we weren’t sure if we’d come back). We made it back to Andoung Teuk with enough time to drink some sugar cane juice with our moto-driving friend and chat about his Chinese heritage before we got on the bus back to Phnom Penh.

(Aaron and I enjoyed a durian on the bus on the way back. Hope that didn't bother anyone...)
Posted by jeff at 3:11 AM No comments:

Moto of the day 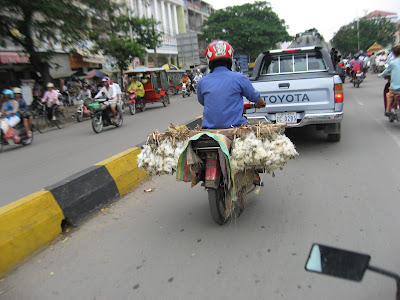 The coveted chicken-moto photograph. Well, actually, not quite. It's the even-rarer baby chicken moto! These chicks were tied at their feet in clusters and hung from a wooden contraption designed to carry them. As we drove by, all I could hear was a steady chorus of "peep-peep-peep"
Posted by jeff at 5:17 AM No comments:

Help me cover my costs